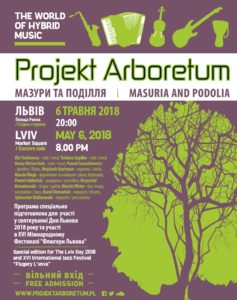 Old, and mostly forgotten songs and dances from the Masuria and Podolia region became the inspiration for the international premiere of the Projekt Arboretum, produced especially for the International Jazz Festival “Flugery L’vova”. Some of them were transcribed by prominent ethnographers, such as Oskar Kolberg. Others have been passed down from generation to generation and nowadays Polish and Ukrainian ethnomusicologists and enthusiasts draw inspiration from the former „masters”.
The Arboretum Project presents, in a novel way, extraordinarily beautiful, traditional old folk songs and dances. Members of the ensemble present seemingly simple tunes, incorporating them into hybrid arrangements. At the same time, they also reach for the contemporary means of expression, such as Jazz, Ethno, Alternative and Progressive rock, as well as Sung Poetry, and Electronic or Classical Music. Additional source of inspiration are Bukowinian and Podolian roots of Ola Turkiewicz and Jacek Górski, creators of the Projekt Arboretum. For five years, Ola and Jacek have been producing the Arboretum Project at the amphitheatre on Czos Lake, located in Polish Masuria, called the Land of a Thousand Lakes. Ola and Jacek are also the creators of the Polish Independence Concert, the cyclical musical project produced since 2009 and performed, among others, in the Warsaw Rising Museum, at the Royal Castle in Warsaw, and at Westerplatte in Gdansk.

The Arboretum Project, at “Flugery L’vova” festival, is being carried out at the invitation of Mr. Marek Iwaszczyszyn and Dzyga Art Association from Lviv.

Producer and scriptwriter of the Arboretum Project – Jacek Górski

The repertoire of the Polish – Ukrainian edition of the Arboretum Project “Masuria and Podolia”.

Co-financed by the Ministry of Culture and National Heritage of the Republic of Poland.